All about Clouds for the SKP Training Session 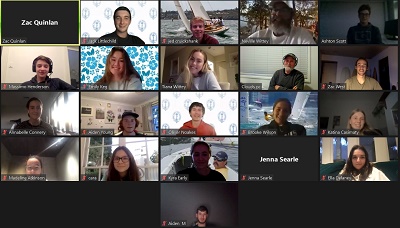 During lockdown, Squadron Keelboat Program (SKP) coach Nev Wittey, has been hosting a ‘Champions of Sailing’ online series with special guest appearances from Will Ryan, Nic Douglas and Iain Murray to date.

On Monday, another sailing legend, Roger Badham, made a special appearance. Known as ‘Clouds’ in the yachting world, he is a weather guru who helped many winning America’s Cup, Olympic, Sydney to Hobart and round the world racing teams call the shots for more than two decades. The Squadron Annual Cruise fleet have also benefited from his knowledge for over twenty years. Beyond sailing, he has also provided valuable weather data to the Ferrari F1 team since 2007.

During training, Roger gave the SKP an insight into where he gathered his weather data and how to interpret it. He also explained how his weather forecasts impacted sailing teams’ decision making and strategy, including how to apply it to the SKP’s own racing.

We thank Roger for his time and express our gratitude to him and the amazing knowledge that he shared.